In this article, Alexandre, FunBelote ambassador, will detail for you the types of strategy practiced in the bidding of coinche and contrée, two variants of your favorite card game known as belote! After reading this, you will have all the tools you need to announce your contract as “small-game 80” or “2-ace 80” and to try to score the maximum number of points with your partner at the card table!

Alexandre, you are our ambassador and an experienced belote player. What would you like to speak to us about today?

Hi to the FunBelote community! This is Alexandre (alias Captain_Hook21). Today, I would like to talk to you about the two styles of player that you will meet in belote contrée and coinche. You know, these are two card games where playing as a team is paramount! In fact, these two “styles” correspond to bidding strategies…

Two playing strategies or two styles of belote player? What do you mean?

Let me explain 😊 Generally, among really experienced players, one is often defined by one or the other of these playing styles: the “small-game 80” and the “2-ace 80”. It’s a bit like a signature!

Yes, I think so too. I’m sure you suspect that it was not me who came up with these names but you’ll see that, once you understand them, they do make sense 😉

I’ll start with the easier one; that is, the “small-game 80”. As was explained in the rules of the game and the various articles on the FunBelote blog, when you play belote contrée and/or coinche, the four players must always start the game with a round of bidding. The first possible bid starts at 80 points (even though the accepter must make a total of at least 82 points in order to fulfil his contract).

So, if you apply the “small-game 80” strategy, that means that even with a very good hand, a player must start by bidding at 80. This strategy is often used by players who are just starting out or who don’t want to take too many risks.

Can you strategise with your partner?

He can then also have an agreement with his partner. In that case, a player can decide, with his teammate, to always start the bidding by announcing a contract at 80. To be completely honest, this is not a good belote strategy, as after receiving your cards, by making this “agreed” bid, your announcement will not really have anything to do with the cards that were just dealt to you… Therefore, it is not the best method for winning the most points, bumping up your scores and winning the game! It is often your opponents who, in the end, emerge victorious…

A good “small-game 80” hand would be, for example, the following: Jack of Hearts, 9 of Hearts, Ace of Hearts, Ace of Spades, 10 of Spades, 7 of Spades, King of Clubs, Queen of Clubs, and 8 of Diamonds. With this hand, whether you are playing belote contrée or coinche, you are going to be able to play in the same way, since you won’t be announcing any combinations (tierce, square, fifty, hundred…).

Are you wondering how you can play like this if you do not have a defined strategy with your partner?

Personally, I would start at 90 Hearts or 100 Hearts, without hesitation. But if you are a “small-game 80” player, you are going to announce your contract at 80 Hearts.

I do understand better why this belote strategy is called the “small-game 80”! Will you explain to us the “2-ace 80” variant?

Yes, let’s move on to the style of player called “2-ace 80” (also called “players with aces”, though more so by our oldies 😉). This strategy is more complex and must be defined in advance with your teammate. For if he isn’t kept in the loop, you risk losing a few games…

The convention for this strategy in the games of belote is simple. No matter what you are holding in your hand, if you have 2 aces, you must bid at 80 and in a different suit to those where you have the 2 aces — and only if you do not have the Jack or 9 in that other suit. This bid enables you to let your partner know that you have 2 aces if you bid at 80. Watch out: if you have a hand without aces but WITH a jack and/or 9, you will then need to bid a contract of 90 at the minimum 😉

Let’s take an example of a good hand for a “2-ace 80”: Ace, King, 8 in Spades; Ace, Queen in Clubs; 10, Queen in Diamonds; and 8 of Hearts. If you are a “2-ace 80” player, with this hand, you will announce “80 Diamonds”. This bid will tell your partner that you have 2 aces, that they are not in Diamonds and that you have one, maybe two cards in Diamonds but not the Jack or 9 in the suit.

Your partner will have several options:

This bid is a bit special: there is no trump suit and the cards therefore all have the same order and value in each suit. This will be expanded upon in a later article.

In the end, this is rather simple as a belote tactic, don’t you think? The important thing is to be on the same page in every partnership! Especially if you envisage taking part in belote competitions at a table, in order to avoid mishaps!

Keep in mind that the “2-ace 80” is still more complex in terms of agreements between players than the “small-game 80”.

What about you, Alexandre; which player are you? What is your preferred belote strategy?

My answer will surprise you: but it depends! Yes, it depends on my partner.

When we are having fun as a family in a relaxed setting, I usually play “small-game 80”. But when I play with my partner in belote tournaments, I switch to “2-ace 80” mode.

You don’t mention this type of strategy in classic belote; how come?

Yes, that’s true. It’s simply because in classic belote, you don’t get that type of player 😊 And that’s normal since, in belote, you only get to see five cards during the accepting phase. And the trump suit is decided by the card turned face up (by the dealer when distributing the cards) and not by the players bidding round the table. So you don’t announce the value of the contract in the same way…

What’s more, in traditional belote, there is no way of communicating as a partnership. That is the big plus of belote contrée and coinche: there are many more partnership strategies and they are varied too! Whether it’s between the accepting side or the defending side, this code of communication between players makes each game of belote much more interesting!

Do you have any final words for this “belote strategy” interview?

I imagine that, after having read this article, you will definitely want to try out the “2-ace 80” strategy! But to be absolutely honest, it is necessary to have experience with game tactics and to know and communicate with your partner when trying to become a “2-ace 80” belote player.

My advice is to stick to your playing level. If you are starting out with belote contrée or coinche, start with the “small-game 80” strategy so that you can familiarize yourself with the game but also learn how to communicate with your partner. After that, if the taste of risk and thirst for learning are your best assets, anything is possible! Up to you 😉

And looking forward to seeing you soon on FunBelote, the official app for playing belote online! 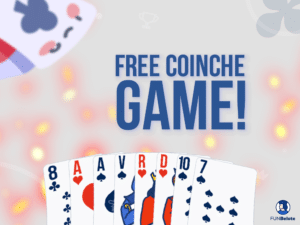 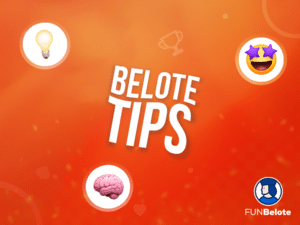